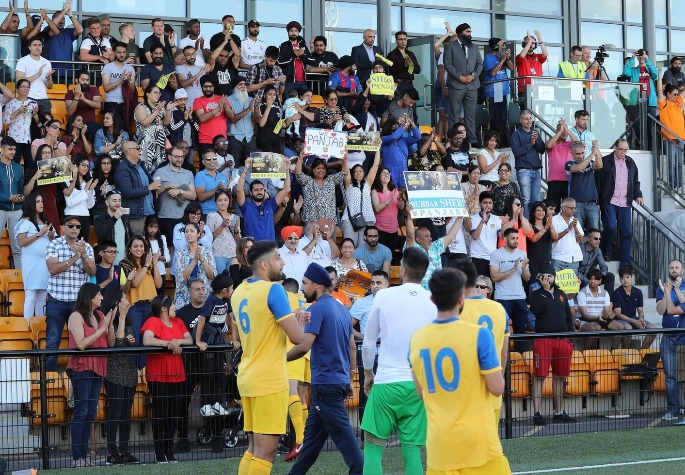 Panjab FA’s second game of the 2018 CONIFA World Football Cup against Western Armenia did not end as well as their opening day victory over Kabylia. Their Group D rivals snatched a crucial 1-0 win in a fiery and controversial encounter at Arbour Park, Slough.

The two teams are no strangers to each-other, having previously competed in an equally feisty 2016 World Football Cup quarter final in Abkhazia. That game ended in a 3-2 victory for Panjab but ended in unsavoury scenes as players and coaches of both sides clashed after the final whistle.

There was just one change to the Panjab team which had beaten Kabylia convincingly two days earlier. Rio Riaz came in to the side for Raj Virk to offer more steel in the Panjab midfield.

Western Armenia wasted no time in making their presence felt once again. Just seconds into the match, captain Hirtach Yagan shoved his hands into the back of Jhai Dhillon before putting them into his face as the Panjab defender attempted to take a throw in.

That was to be a sign of things to come. Barely a minute later, David Hovsepyan went down easily looking for a free kick from the referee who waved it away. With play continuing, Hovsepyan hit out at Dhillon in an off the ball incident leaving the referee to consult his assistant on the touchline.

Somehow, Hovsepyan escaped with just a booking with the referee brandishing a yellow card which had to be given to him by Panjab’s Toch Singh after the official had earlier dropped it.

It was a spicy start to this Group D clash to say the least, and the Panjab fans in the stands were making plenty of noise to support their team. But in the 14th minute, Western Armenia took the lead.

Dhillon took a quick short free kick to Gurjit Singh who was immediately surrounded by three Western Armenian players. The winger produced a sublime turn to evade the challenges before spreading the ball out to Toch Singh on the right.

Unfortunately, an awkward bounce made it difficult for the full back, and allowed Western Armenia’s Raffi Kaya to nip in. He fed the ball to Militosyan who struck an effort which deflected off Aran Basi and past Yousuf Butt in goal.

The Western Armenian team raced back to their dugout to celebrate, kissing their badge in front of the Panjab fans on their way, prompting boos from the crowd.

Another flashpoint came in the 25th minute when, once again, Panjab’s Jhai Dhillon was involved in an off the ball incident. Militosyan struck Dhillon with his arm right in front of the Panjab supporters, leading to chants of “Off, Off”. But strangely, nothing was given.

Soon after, Riaz curled a cross in to the Armenian box which was brilliantly flicked on by Arjun Purewal. The ball dropped to his fellow centre back Aran Basi who met it first time with his outstretched left foot, but Gevorg Kasparov pulled off a fantastic reaction save to tip it over.

The Western Armenian’s were then influential in convincing the referee to book Dhillon for his challenge on Artur Yedigaryan which left the winger screaming momentarily. It was clear that there was bad blood between Western Armenia and Dhillon, with several more challenges coming his way before the half-time whistle.

Western Armenia switched to a 4-4-2 for the second half, and it very nearly brought immediate reward for the team. Vicken Valenza Berberian raced through, and his rasping shot from a tight angle cannoned off the Panjab post.

Amar Purewal then completely bamboozled Rafael Safaryan whose hard and late sliding challenge was closer to hitting the linesman than the Panjab striker. Despite the force of the attempted tackle, no card was shown to the defender, much to the annoyance of the vocal Panjab supporters.

Arjun Jung and Rajpal Virk then came on for Panjab with just over half an hour to play, with the duo replacing Rio Riaz and Camen Bhandal.

Bookings continued to come Western Armenia’s way, but so did chances. Yedigaryan’s free kick had to be parried away by an unsighted Yousuf Butt with the ball only needing a touch to be put beyond the goalkeeper.

David Azin then went into the book, for a late foul on who other but Jhai Dhillon. Zaven Varjabetyan then sliced a good chance horribly wide after a neat one-two.

Amarvir Sandhu then produced a moment of magic to weave through three Western Armenia challenges before passing across the six yard box, but nobody in a yellow shirt was there to convert the ball home for Panjab.

Panjab’s opponents defended resolutely for the remainder of the match, leaving it to end in a 1-0 defeat for the UK based team.

Western Armenia currently top Group D of the 2018 CONIFA World Football Cup ahead of the final round of fixtures due to take place on Sunday 03 June.

The present group leaders will take-on Kabylia, looking to cement their top spot. Panjab, meanwhile, will face United Koreans in Japan in a must-win encounter for both sides.

Panjab FA vs United Koreans in Japan will take place at 6pm at Arbour Park, Slough. Tickets are £12 at the gate, will you be coming along to help roar your Lions to victory?

You can also watch a full replay of Panjab FA vs Western Armenia by following this link.